Syrian artist, Tammam Azzam, was featured on the Huffington Post earlier this year for superimposing Gustav Klimt’s “The Kiss” over a bullet-ridden building in Damascus. This particular image went viral amongst the entire social hemisphere, captivating the hearts of romantics, freedom fighters, sufferers, and empathizers.

Azzam’s “passionate plea for universal love” resonates with so many people, including ourselves, as it depicts a reality so far removed from the Western world. The usage of a common denominator (in this case, Klimt’s most famous and recognizable work of art), anchors the image and creates a sense of connectedness with the art world. 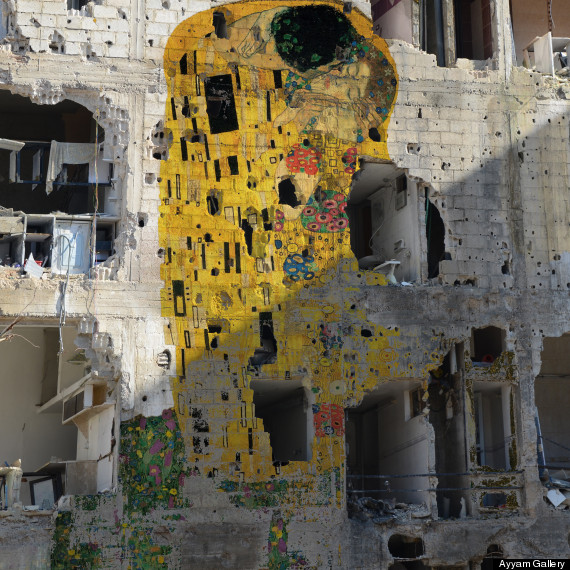 “I want to discuss how the whole world could be interested in art and on the other hand two hundred people are killed every day in Syria. Goya created a work to immortalize [the] killing of hundreds of innocent Spanish citizens on May 3, 1808. How many May 3rds do we have in Syria today?” – Tammam Azzam

So in honor of Azzam’s effort to bring the world’s attention to his war-torn country, we decided to showcase ten more Middle Eastern artists who explore themes of political strife, identity, or universal love. 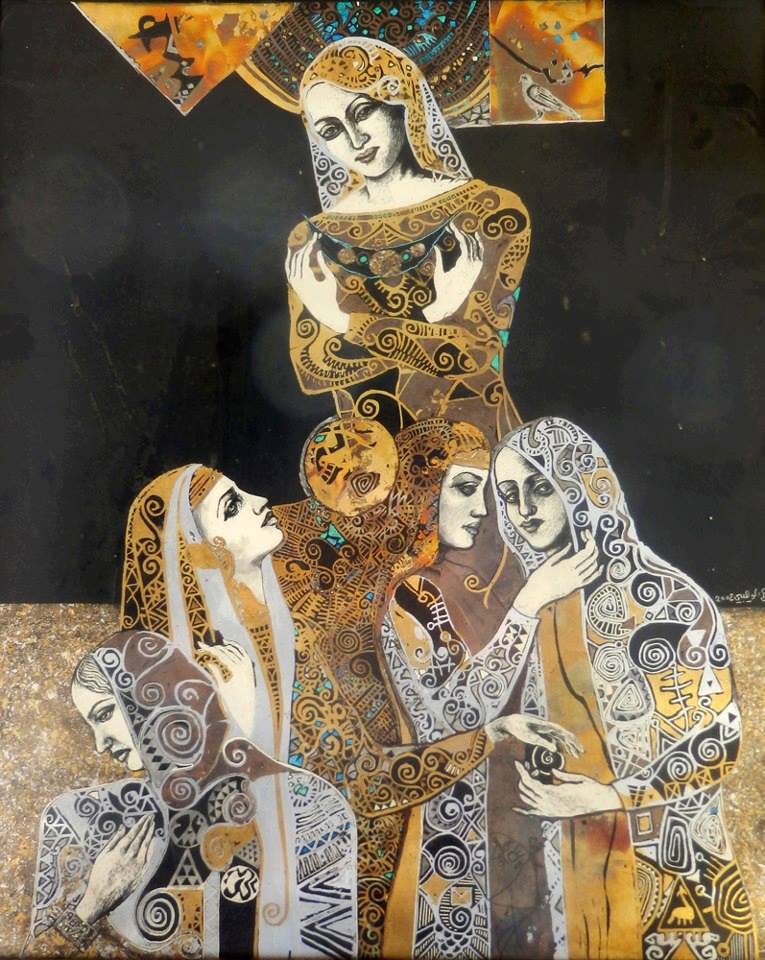 Why we love this: We don’t know much about this particular artist but he’s one of our favorites so far. The fact this his online presence is almost inexistent doesn’t affect his ability to stand out amongst other Syrian/Middle Eastern artists.  His usage of geometrical shapes and lines come across as a statement regarding religious or astrological ideas within Islam, or perhaps a women’s role in a religious context.

Why we love this:  You’ll notice each figure has an expression of silence or thoughtfulness, which is intended to portray the solemn state in Sufi devotions. It’s Maysa’s intent to narrate the ethos of the common man and his journey through human endeavors. And in our opinion, her wanting to express moments of silence or pensiveness is a breath of fresh air. Why? Because embracing our ethos in a noisy world is almost as difficult as living in it.

“What I try to do when I paint is to rewrite my life; I try to place myself as a witness of the situations and the events I experience. That’s why there are no boundaries between political matters and private stories in my work.”

Why we love this: Hani’s work has gained international recognition by political and social commentators, as well as the art world. His usage of vivid colors and abstract figures exhibit feelings of high tension, truly reflecting his experiences as a Palestinian artist living in exile. Hani has been unable to return to his native Gaza since 2006 and his abstract style showcases the tumultuous journey through movement and displacement. This concept is, unfortunately, very much relatable for many Palestinians today. Hani’s work has been featured on the Huffington Post’s 10 International Artists To Watch In 2013 and Hani Zurob’s ‘Between Exits’ Shows Palestine From An Exile’s Point Of View

“My paintings are vertical, meant to lift one up. It comes from a stubborn belief in love and beauty in a world where these things can be hard to find. This is what my work is about.”

Why we love this: It’s interesting that themes of nature and spirituality are used to signify hopes for endurance. It’s true, it is difficult to find love and beauty in this world. That’s why optimism is as refreshing as an ice cream sandwich on a hot day.

Why we love this: To put it simply, we love the gothic influence in Afshin’s photo-realistic depictions of women.  His “street art” aesthetic can be interpreted as an examination of modern Iranian culture and its issues that women are facing.

Why we love this: Many Middle Eastern artists create artwork based off of interpretations of current political affairs. Including this one. However, Oussama’s use of bright colors and Pop-infused painting style allows him to address serious issues in a fantastical way.

“Each urban toy has a message. An open message ready to be inhabited by stories which become mingled with history.”

Why we love this: Nadim has once referred to his dream-like public sculptures as “urban toys,” acting as whimsical and rebellious characters that bring life to soulless city spaces. What’s not to love about that? This artist bridges the gap between dreams and real-life by implanting large scale steel sculptures in random cities around the world.

For a young person here, there’s nothing — you can escape abroad or flee into drugs and alcohol.

Why we love this: Aghiles created a series of portraits that capture the anger and disillusionment that many of his Algerian peers are facing today. The recent political turmoil of his country has left the youth jobless and hopeless, and Aghiles works to bring those issues front and center. His message and style may not be “dream-like” or bright, yet it’s most certainly inspiring. Aghiles’ work has been featured on the Huffington Post’s “50 People Shaping The Culture Of The Middle East”.

Why we love this: The Magnetism series is absolutely m-m-magnetic. Ahmed uses magnets and tens of thousands of tiny particles of iron to showcase the famous Hajj, the great annual pilgrimage of Muslims to Mecca. His exploration of attraction-repulsion and the cosmos resulted in allowing the viewer to gaze upon this “event” from the vantage point of a helicopter, or even higher than that. It’s a bit empowering, if you ask us.

I wish to present myself through multiple lenses — as artist, as Moroccan, as Saudi, as traditionalist, as Liberal, as Muslim. In short, I invite the viewer to resist stereotypes.”

Why we love this: Last but certainly not least, you’ll notice that not all of the women are wearing the hijab, and some appear to be draped in sheets rather than wearing them. There’s something to be said about the complexities of middle eastern women and their roles in society. Lalla explores those issues in a fundamental way, through traditional Islamic rhetoric and photographs of women encompassed by them.