The recent government protests at Istanbul’s Gezi Park left quite the impression about life and politics here in Turkey. The very public displays of police brutality allowed the international community to witness firsthand what is to be tolerated, and what isn’t.

In early September, another protest erupted in my neighborhood near Taskim Square, in the case for Ahmet Atakan, a 22-year-old protestor who died in southern Turkey after being hit by a tear gas canister. Atakan, along with others his age, were speaking against Turkish prime minister, Recep Tayyip Erdoğan, and his future plans for the country. To my understanding, Erdoğan has given his policemen full permission to use force and aggression against protestors demonstrating against him and his policies.

A report published by Amnesty International accused Turkey of “gross human rights violations” with excessive attempts of police brutality and the failure to bring these violations to justice.

While the distinction between whether or not Erdogan showed bravery or bravado in his attempts at silencing protestors (depends on who you talk to), Turkey continues to be a country of many, many layers, both culturally and religiously. These layers are what defines this country, but also divides it. Erdogan and his supporters nod to the old, and protestors salute to the new.

We couldn’t help but be inspired by the recent happenings over the past few months, so we decided to create two mock tear gas advertisements, one vintage and the other modern. The first pays tribute to Istanbul’s most celebrated aesthetic–a love of all-things vintage (a hidden treasure for antique enthusiasts). The latter is created with more modern ad components, an emphasis on imagery with fewer words.

Both are translated into Turkish (thanks to our wonderful friends here in Istanbul). Check them out: 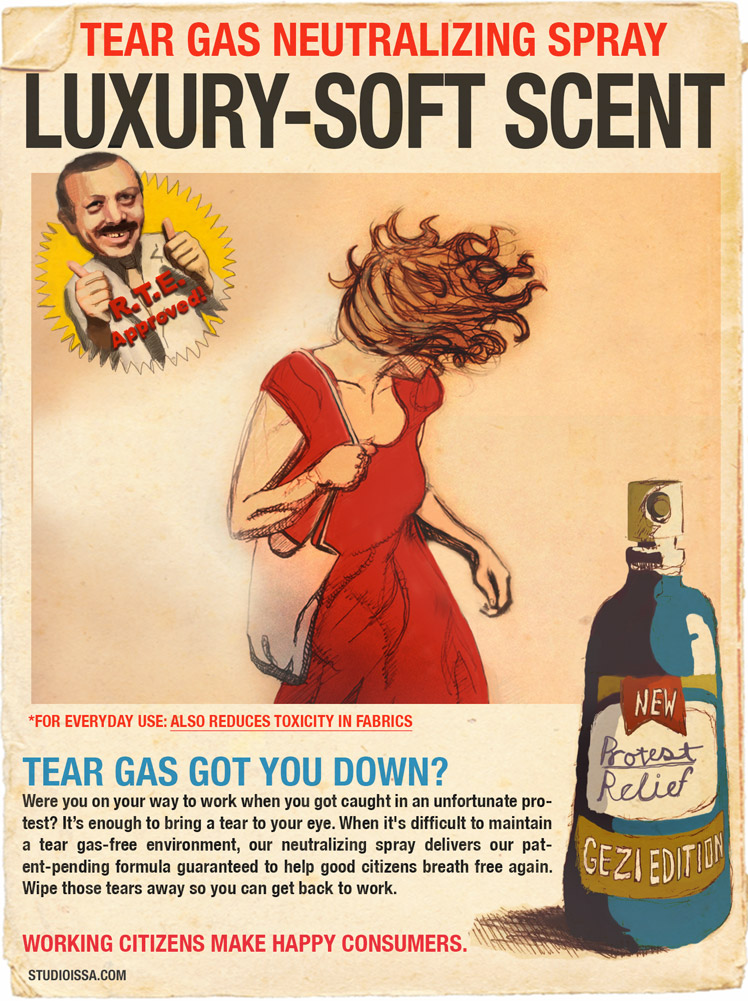 If you’ve been paying close attention to the protests, you might recognize our homage to “The Woman in Red”–a woman who became the symbol of the Turkish protests after she was tear-gassed by the police.

Istanbul is littered with thrift stores and vintage ads from the 50’s, 60’s and 70’s, so we decided that this would be an opportunity to put more focus on content and sensationalized imagery. It was also quite common for protestors to carry around water bottle sprays as the protests went on. 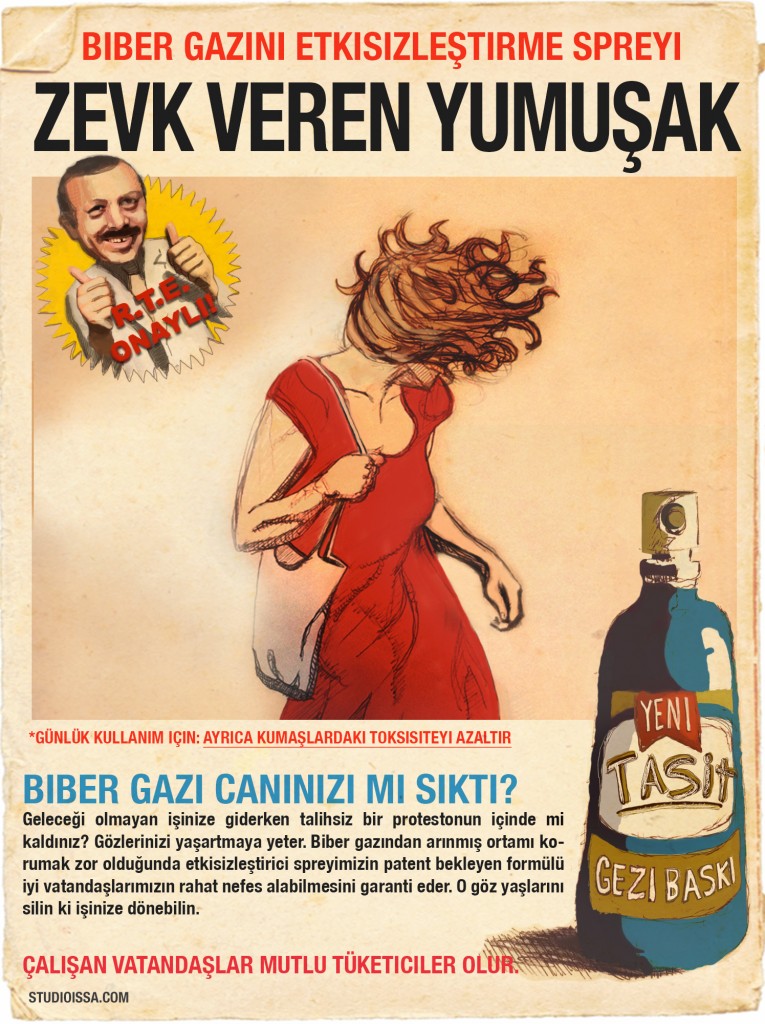 We were told that during the protests, many would yell out “Tasit!” for water bottle sprays when they or someone they knew was gassed.

This image that we used is one that has been circulating the internet. We think this one is quite beautiful in that the boy looks like he’s surrounded by clouds. Both ads contain humor and light-heartedness. This is a direction in marketing that Studio Issa strongly believes in. Being cynical or condemning the state of affairs directly would be polarizing. We attempted to get around the biases of those that may be conservative and side with RTE using humor. By poking fun at the situation and the Prime Minister, we were trying to work in components of positive psychology, politics, and irony into the campaign.

Here’s ad #2 with the Turkish translation: